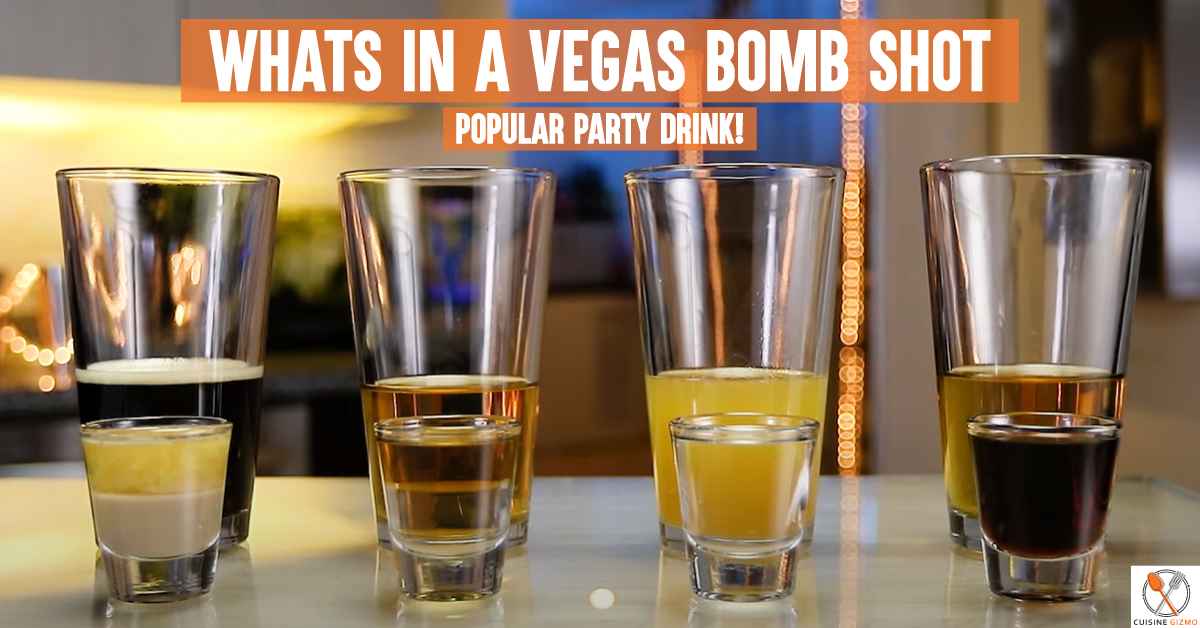 Whats In A Vegas Bomb Shot- Want to overwhelm your guest with a delicious party drink? Here is the best option for you that will be perfect for the small family gatherings, “Vegas Bomb Shot.” It is the most popular order at the bar. I have no idea if it’s the finest or most nuanced drink… but I can’t deny that it’s fun.  If you want to know “what’s in a vegas bomb shot,” then it contains three liquors- Crown Royal Canadian whisky, peach schnapps, and Malibu rum (or other coconut rum)—plus Red Bull energy drink.  It is popular at bachelorette parties and among college students who want a shot of caffeine with their alcohol. Lets check out Whats In A Vegas Bomb Shot and all about this shot!

Like other drinks, the vegas bomb shot also lost its exact origin, but if we talk about its first appearance, it was first seen in the club of las Vegas about ten years ago. It is believed that it was the result of an experiment of some bored bartender or college students. However, it is now one of the more popular drinks in tourist bars in Las Vegas and across the nation.

The ultimate goal of the shot is to consume as quickly as possible. So the shot should also have a little flair to it. A Vegas bomb is a pretty effective system for delivering alcohol.

The name of the shot derives from the frequent nuclear tests conducted near Las Vegas in the 1950s.

The most primary reason for the popularity of the vegas Bomb Shot is its taste. We have to consume most Bomb shots quickly, as they taste terrible. On the other side, the vegas bomb shot offered you great taste with a big alcoholic punch. However, it has a downside that sometimes you lose track of how many shots you consume.

Nonetheless, it is such a popular drink that it has inspired a romance novel series. Except in that scenario, the term “Vegas bomb” has a very different connotation.

But when a drink reaches the level of being described as a romance novel plot twist, you know it’s renowned.

Variations in a Vegas Bomb Shot

You can find many variations in the vegas bomb shot. Some of them are so different that they will become almost another drink. Even though the name is so popular, some crazy beverages are named the same and do not even taste the same. The name Vegas Bomb Shot quickly makes the drinks popular.

Some of the variations are:

If you like Red Bull, you’ll enjoy the Vegas Bomb shot since it tastes great. In addition, it’s one of the easiest shots to consume. It doesn’t have a particularly strong flavor, but it will leave you feeling energized after a few rounds.

If you are planning a party and want to avoid any glass breakage, it is suggested that you purchase special bomb shot glasses made of plastic.

Thrifty Ice Cream Scoop that will bring back childhood memories!

Slimy carrots: How to tell if carrots are bad?

How to Know if Salmon is Cooked: Cook Salmon in the Oven!