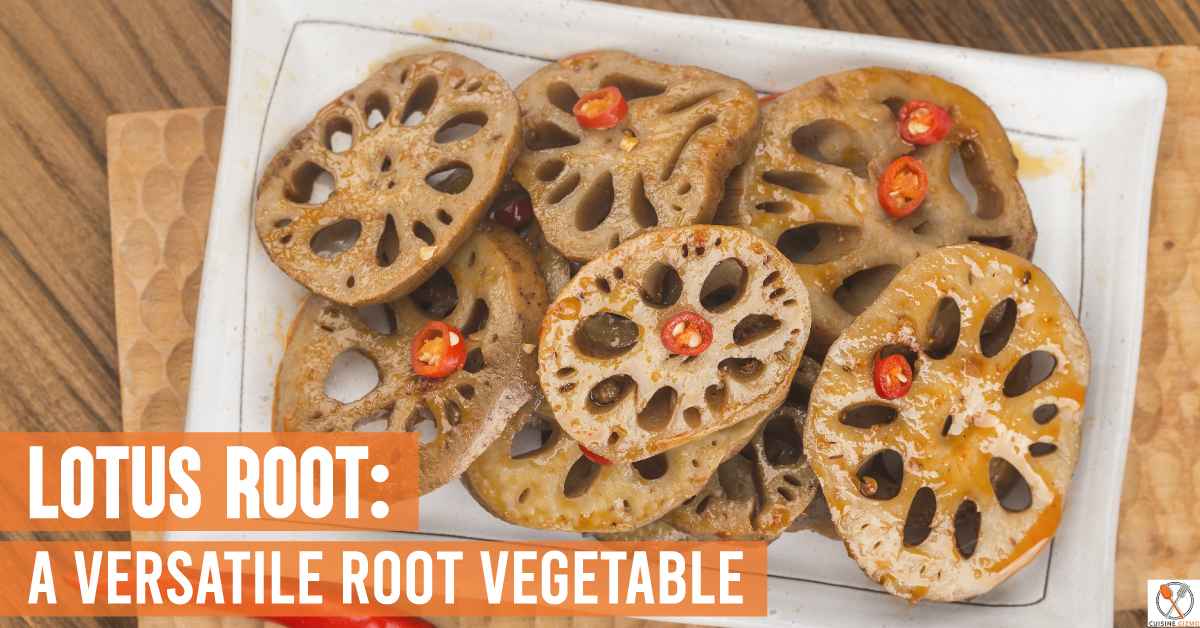 Although known as a lotus root, it’s actually the rhizome of the lotus flower. These roots can grow quite long underwater and have segments linked like sausages. They are usually sold in shorter, more manageable portions and have become increasingly available at Asian stores. Low in calories and an excellent source of fiber, they have long been enjoyed in Asia for numerous health benefits that include high vitamin and mineral contents. A traditional Chinese soup recipe of lotus roots boiled with peanuts is said to be good for the lungs.

What is Lotus Root?

Lotus is a plant native to Asia, Australia, New Guinea, and the Middle East. Because the lotus thrives in murky waters, it’s the lovely pink, purple, or white flower floating in shallow pools, lagoons, and marshes that you’ll commonly find represented in Buddhist paintings as a sign of enlightenment. Although the surface may not appear particularly delicious because of its pale brown hue, when you slice the foodstuff into it, the interior’s lacy geometric perforations make the food shine out. One of the first documented harvests of lotus root took place centuries ago in Guangzhou, a region in southern China. However, in the Huadu region and town of Jingtang, these delicacies were extracted from the mud, washed, cooked, and served. People still harvest lotus roots around the Dongzhi Festival, the region’s Winter Solstice festival that follows the Chinese Lunar Calendar. According to legend, the first lotus blossomed nearby owing to He Xiangu, one of Chinese mythology’s Eight Immortals. She gave the starving people lotus seeds, and from those plants sprang roots and a bountiful harvest of food that needed no work to cultivate and would renew the following year.

Lotus root tastes mild but delightfully sweet. When eaten raw, it has a crisp feel comparable to celery. When you bite into it, it has the same watery freshness as celery. It is also known as the underwater sausage because of the way the roots join. When cooked for a longer time, such as in stews, it acquires a texture similar to a potato. A variety knows lotus roots of names, including Sacred Water Lotus and Chinese Arrowroot. Renkon is how the Japanese refer to it. The root, which has a moderately bitter, crunchy flavor comparable to jicama, may be consumed raw or cooked. It’s pretty flexible and may be eaten raw in salads, cooked in soups and stews, steamed as a side dish, or pan-fried. The darker a root becomes as it ages, so look for a solid, light-colored root and store it in the refrigerator.

How to Cook Lotus Root?

You can prepare lotus roots in many ways, including boiling, baking, or frying. However, stir-frying is one of the most traditional ways to cook lotus root because the soft yet crispy quality of the vegetable is preserved.

It is recommended that the vegetable be cut crosswise into quarter-inch slices and placed in a pot of vinegar water brought to a boil for this procedure. Cook the lotus root slices for three to five minutes, or until crisp-tender, then add to a salad of mixed greens or serve over rice with soy sauce, rice vinegar, and sesame oil.

Slice them into thin chips, like you would a potato, and season them with your preferred seasonings, such as a blend of olive oil, salt, and other spices. Bake the slices for 20 to 22 minutes at high heat, flipping halfway during cooking.

To stir-fry lotus root, cut it crosswise into quarter-inch slices and cook for two to three minutes in a tiny quantity of oil over medium-high heat. To enhance the distinctive crunch of lotus root, add vegetables such as asparagus, snow peas, and carrots.

How to Store it?

Lotus roots should be fat, heavy, and firm. For freshness, the color should be light brown and there should be no bruises or cracks. You can store them for up to two weeks in the refrigerator if they are wrapped in paper towels or a damp cloth in a plastic bag, but they should be consumed within a week.

It’s a light, healthy, delicious soup made with lotus root, pork ribs, and groundnuts. The combination of ingredients gives the soup a unique taste. It is also a healthy soup containing only a few ingredients.

Sizzling Plates: Sizzle Up Your Food!

How to Tell if Asparagus is Bad- Tips for Storing it!