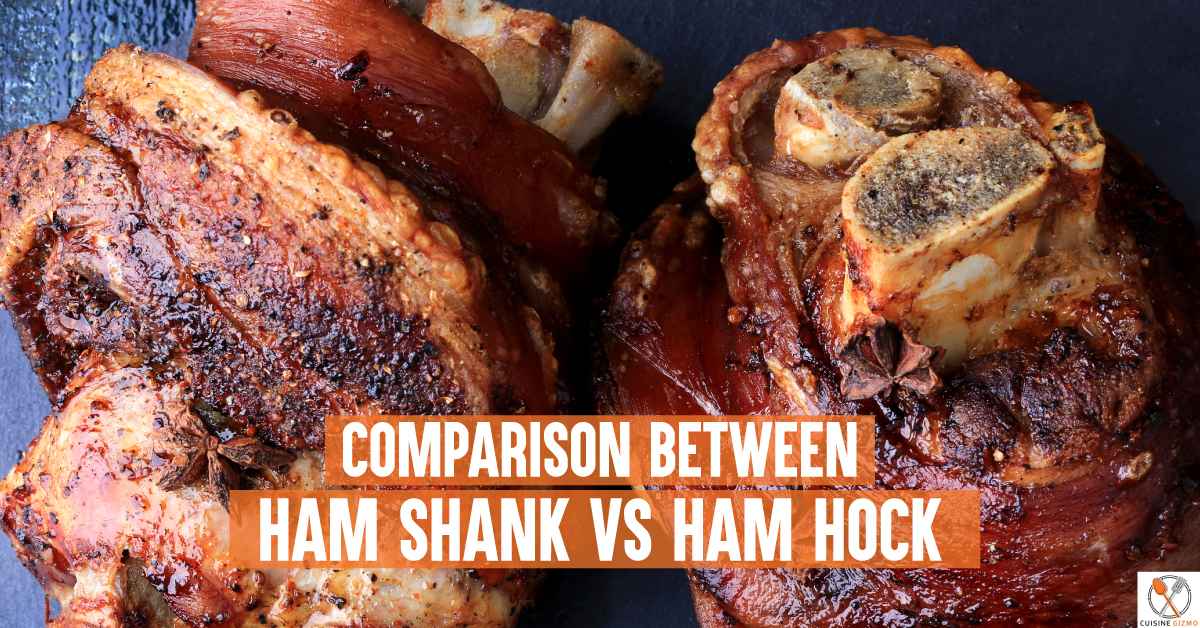 What is Ham Hock?

Ham hocks are also called pork knuckles. They come from the bottom of a pork leg and consist mainly of bone, fat, connective tissue, and some meat. Ham hocks require a long time to soften and contribute flavor, so they’re best utilized in dishes that cook slowly. Usually cured in salt and smoked, it has a rich, salty, smoky flavor similar to bacon.

What are the Uses of Ham Hock?

Despite its limited amount of meat, ham hocks are something of a delicacy, and they are often drizzled with sweet glazes to contrast with the smoky flavor of the meat. Simmer it until the meat comes off the bone, shred it, and eat it hot or cold.

You can infuse soups or vegetable dishes with extra flavor using a ham hock. A large amount of cooking is required to make the meaty parts palatable. They are often prepared slowly with vegetables and soups so that the collagen and fat can dissolve and impart a savory and smoky taste.

What is Ham Shank?

A Ham shank is the meat cut that is taken from the bottom half of the leg. There is not much fat at the end of the ham shank compared to the end of the butt. But the pro is that it contains only one bone, making it easy to carve. The flavor of the ham shank is slightly sweeter. If the cut is labeled ” shank half,” it has not excluded the center ham slice. If the center slice has been cut, the cut will be labeled ” shank portion.”

What are the Uses of Ham Shank?

The ham shank is a cheaper cut of pork and can be a great meal for your family that is quick and easy to prepare. All you need to do is bake it, slice it and serve it with your favorite side dish vegetable. Also, use the leftovers for making sandwiches. Or you can use your experiment and ideas. Either way, you go; you are going to love it!

These skin-on, bone-in pig chops have a lot in common, including abundant oozy collagen, which gives your meat body and a smooth, silky texture. Furthermore, hocks and shanks are typically sold smoked, using them interchangeably to infuse a meal with a subtle, bacony taste. It’s worth noting, though, that ham hocks and shanks are not created equal — they come from two separate pig areas, and one is meatier than the other, making it more flexible.

Ham hocks are the joint between a pig’s foot and leg. Therefore they’re primarily skin, tendons, and ligaments with little meat. On the other hand, Shanks originate from right below the pig’s shoulder or hip and are meatier than hocks.

How do you feel about my article on ham shank vs. ham hock? Let me know in the comments.

Thrifty Ice Cream Scoop that will bring back childhood memories!