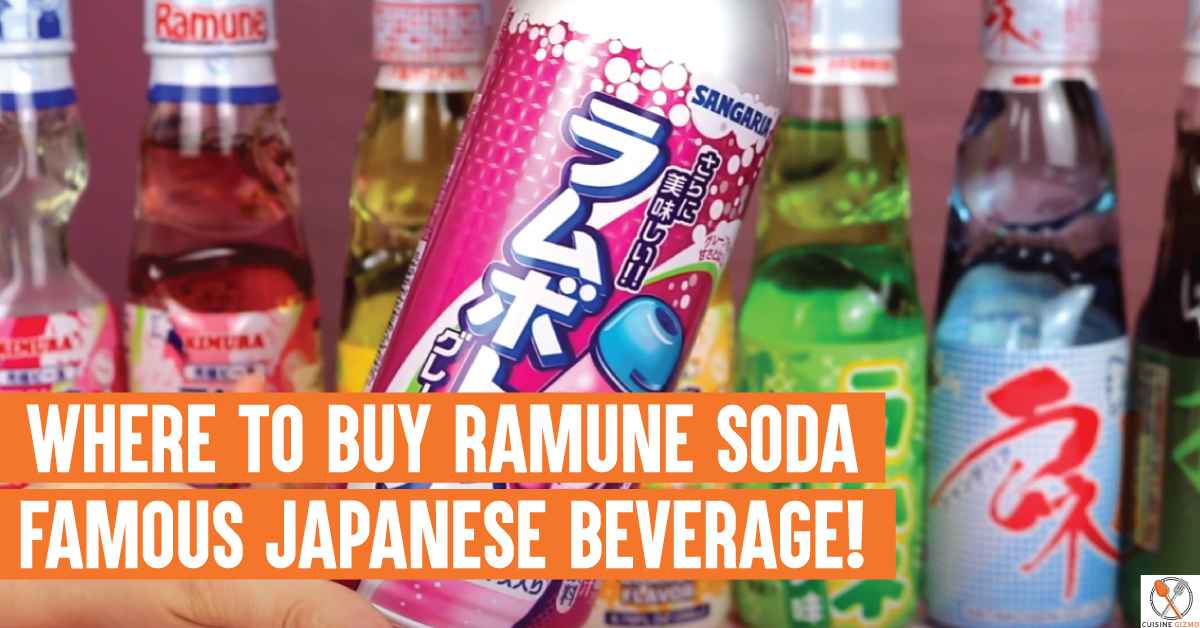 The article contains a brief overview of Where To Buy Ramune Soda. Ramune soda is a Japanese carbonated beverage that frequently appears in anime and Japanese television. Curiosities about the flavor and drink, I decided to buy a few bottles to do my own Ramune Soda Review. The ordinary American, including myself, knows very little about this drink. However, if you are asking, Where To Buy Ramune Soda? You can choose a nearby supermarket or go to amazon.

The lemon-lime flavor has always been the original flavor of Ramune Soda. And, throughout time, numerous new tastes have been introduced. It’s a sweet soda that you’ll like if you like sweet beverages.

Furthermore, this soda is well-known for its distinctive bottle, which is shrunk inside towards the neck. Ramune has a striking appearance, with a very unusual Codd-neck bottle. And the way you open it is unlike any other drink. It includes pushing the marble down the Codd’s neck with the supplied plunger, which starts the fizzing process and then drinking the soda.

The majority of Japan’s population prefers Ramune Soda as a summer beverage. Because the bottles may be reused, they are also considered environmentally beneficial. It also makes a beautiful and one-of-a-kind gift!

Opening the drink first perplexed me, and I struggled to figure it out. In any case, I’ll be looking at how the carbonation seal works, how to open the drink, and whether or not the flavor is decent.

Ramune Soda was created in the 19th century. Alexander Cameron Sim, a Scottish pharmacist, was the first to offer it in Kobe in 1884. He demonstrated his device to the Kobe foreign settlement.

Soon after, it became well-known among the Japanese for its medical usage in the prevention of cholera. However, there is no medical proof to support this assertion. However, it provides you with an idea of the cultural tales around the beverage.

It was initially called “Mabu Soda,” “Marble Soda,” and even “marble pop.” The name is due to a stone in the bottle’s neck, which serves as a seal. It is an old way of keeping drinks carbonated that stands out now since it is so unusual.

The drink itself is glittering and pastel blue, the perfect fairytale refreshment and memory of yelling games of tag and wide-eyed awe at fire sparkles and yukatas.

However, since the original Ramune, many other varieties have been produced, ranging from watermelon and strawberry’s safe yet tasty fruit flavors to the hilariously weird curry, corn soup, and kimchi flavors. (On the Ramune bottle with the curry flavor, it states in Japanese, “Even your Indian friends will be astonished!”)

The taste of the soda changes according to the flavor you are drinking. The one I drank was the original taste that they produce. It tasted light and softly carbonated, with a peach/lemon flavor. The flavor is mild, but it is also very delicious.

How to Open Ramune Soda Bottle?

Follow the given steps to open the Ramune Soda bottle:

What are the Different Flavors of Ramune Soda Bottle?

When Ramune Soda initially appeared, it was lemonade. As a result, Ramune soda’s original flavor is lemon-lime. However, more than 50 varieties and tastes have since been launched globally.

Ramune Soda comes in a variety of fascinating tastes, including:

Given that this is a bottle of Coke, it is not at all nutritious. The great bulk of the nutrition, 20 grammes to be exact, is in the form of carbohydrate or sugar. It is not significantly healthier than an equivalent American beverage. This drink has 80 grammes of calories as well. Looking at the components, it appears that they have eschewed the use of real sugar. Sugar accounts for 95% of the total, with high fructose corn syrup accounting for the remaining 8.5 percent.

Where to Buy Ramune Soda?

You can visit Asian Supermarket, where you will get a wide variety of flavor options of ramune soda. However, if you do not have any supermarket nearby, you can buy it from Amazon too.

I hope you liked my review on Ramune Soda and got your answer to, “Where to buy ramune soda?”

How to Tell if Mushrooms are Bad? – Store Them For a Limited Time Only!