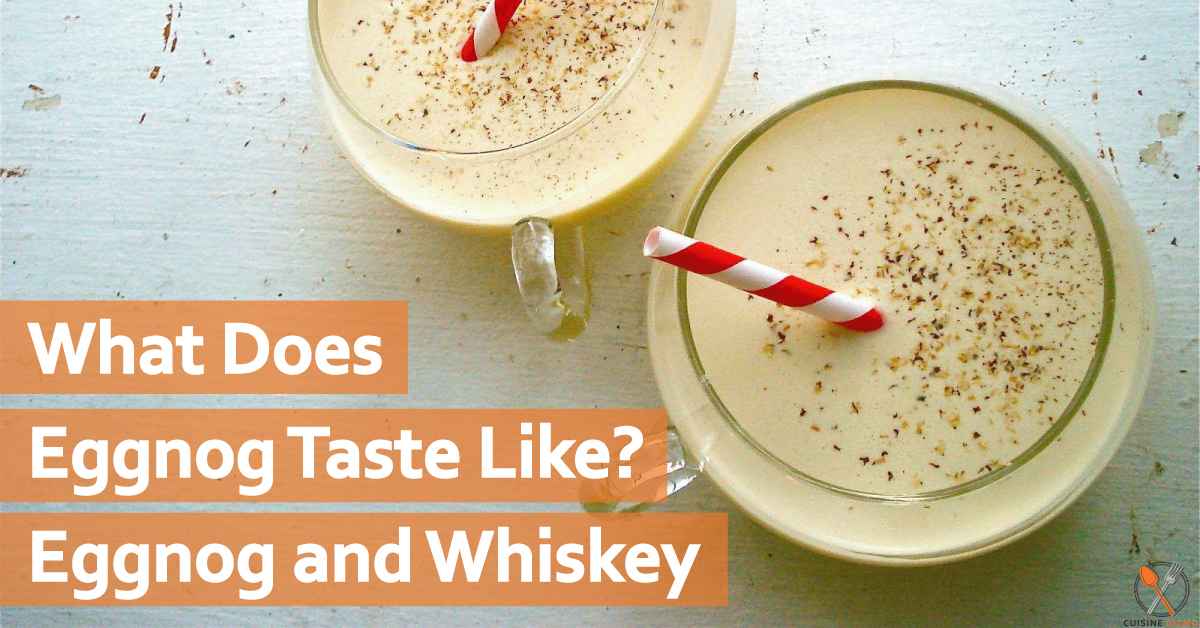 The article contains a brief description of eggnog flavor or “What does eggnog taste like“?

A traditional British drink from the Middle Ages called “posset” gave rise to Eggnog. Posset was a highly regarded cold and flu remedy made of curdled milk, wine, or ale. The monks believed that they mixed eggs with posset during the 13th century. Eggnog was often used to toast prosperity and good health since wealthy people typically drink milk, eggs, and sherry.

A variation of the drink became popular in the United States during the 18th century. Brandy and wine from overseas were taxed heavily, so Americans improvised by adding rum and bourbon or whiskey to Eggnog. The drink became a huge hit in the States.  George Washington served similar libations on special occasions to guests. The Eggnog became associated with Christmas time somewhere along the line.

Eggnog is a beverage popular in the United States and Canada around Thanksgiving and New Year’s Day, made with milk and eggs. Eggnog means eggs inside a small cup. It is used as a toast to one’s health. Nog is an old English dialect word of obscure origins used to describe a kind of strong beer.

A typical recipe for Eggnog includes milk, cream, sugar, eggs, and brandy, rum, or whiskey. Spices like cinnamon, nutmeg, and vanilla can also be added to it. Eggnog is so famous that many varieties, both alcoholic and nonalcoholic, are available today, as well as other food products with eggnog flavor.

People know Eggnog as a delicious, spiced holiday drink, but they don’t know exactly what’s the eggnog flavor. This could be because the name of the drink does not explain precisely the eggnog flavor. For example, the name suggests they might taste “eggy,” but the eggnog flavor profile is much more sweet than savory. A glass of Eggnog flavor like melted ice cream in a glass that’s somehow hugging your throat as you drink it.

The main component is milk, but you can also substitute nut or rice milk for it, followed by eggs, sugar, vanilla, cinnamon, and nutmeg.

Adding alcohol transforms the eggnog flavor into a more complex one that is warm, heavy, and has a bite.

Peppermint schnapps is a favorite beverage for some, while others prefer bourbon or aged scotches.

The traditional recipe is quite simple, but you can modify it in many different ways to suit your taste. As long as you’ve got the essential ingredients, your custard is going to taste like that classic Christmas-in-a-cup flavor.

I have provided a few options of the best eggnog you can buy online below. Be sure to check out your kitchen and stock up on delicious beverages for your guests:

Combination of Whiskey and Eggnog

The combination of eggnog and whiskey is surprising. The combination of the two creates a beautiful “bittersweet harmony,” leaving a nice creaminess. You can taste the oak, citrus, honey, and other flavors commonly found in whiskey in this drink.

How to Drink Eggnog and Whiskey?

It’s easy to combine eggnog with whiskey. Add whiskey to your eggnog and stir. If you are making a larger batch of whiskey, follow this recipe.

What Alcohol goes in Eggnog?

Your eggnog can be mixed with different kinds of alcohol to make it boozier. You should experiment with a variety of options and find the combination that you like the best. Here are some options through which you can select, “what alcohol goes in eggnog”

The sweet flavor of brandy and eggnog perfectly complements the creamy egg base. With a lively flavor and a sort of warm brandy note not masked by the eggnog, it has more depth than the others. There is almost a floral scent to this eggnog and it is quite delightful to drink.

There was a very subtle taste of rum, which was more pronounced on the back end than brandy. Aside from being delicious and having just enough sweetness, the eggnog was alcoholic enough so that you could taste it.

No matter what style you choose, whiskey will make the most flavorful eggnog since its profile emerges from the drink. The rye whiskey was equally impressive but in a different way. These spicy rye flavors popped out of the eggnog and delighted the palate.

Almost all eggnog recipes can be made with one of the three popular spirits. When you find what works for you in eggnog, try it with a different version of the liquor recommended in the recipe. The most important thing is to enjoy the eggnog flavor. This isn’t a bad experiment to take part in, so gather a few nog-loving friends and shake it up.

It may help you to get an understanding of “what does eggnog tastes like” by reading my article on the topic.