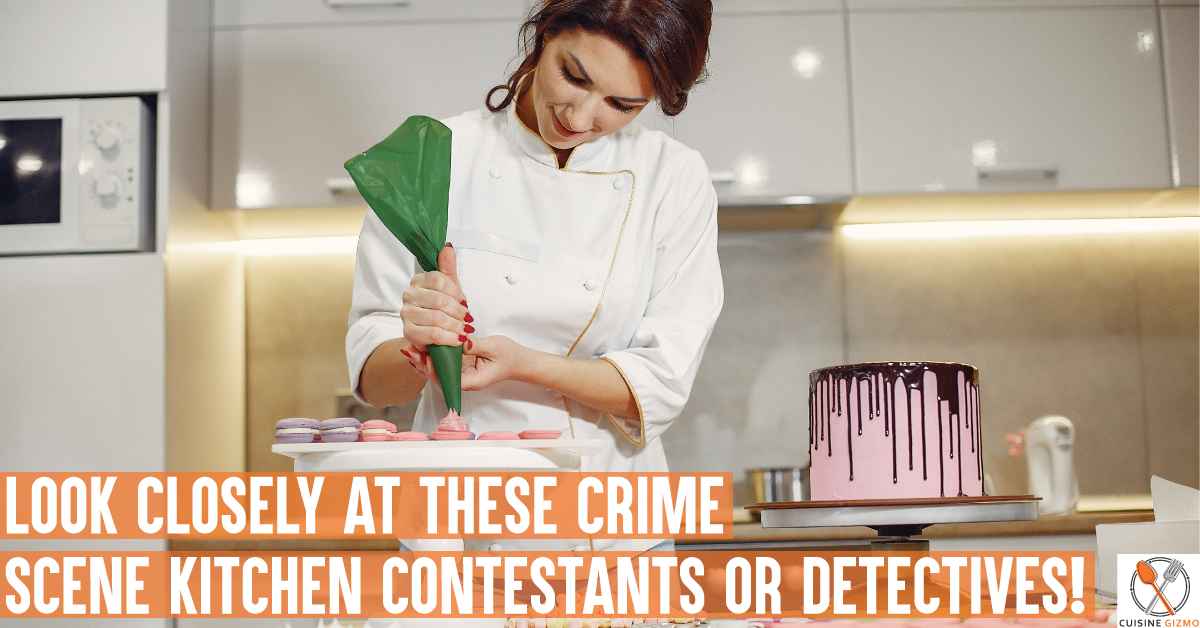 Those who are familiar with the “Crime Scene Kitchen” understand why I included “detectives” in the title. However, if you are new to this reality show, let me tell you that it is a baking show. But, wait! What are the detectives doing there? Yeah! This is the real twist that creates the big hype for this show. So, crime scene kitchen contestants have to work not just as chefs but also as detectives!

The game is that some clues are usually left behind in the kitchen, for instance, a few traces of flour or crumbs, or other mysterious clues. So crime scene kitchen contestants have to use those clues to figure out what dessert was made there, and then they try to recreate that mystery dessert again in the kitchen.

This well-known reality program is presented by Joel McHale, one of the entertainment industry’s most in-demand comedians and actors. In addition, Curtis Stone, a famous chef, and Yolanda Gampp, a YouTuber baker, serve as judges for this competition.

Who Were the Crime Scene Kitchen Contestants?

Crime scene kitchen contestants were divided into Group A and Group B. Each group consists of six teams. So, there were 24 contestants in total.

Here is the information I gathered about a few famous teams as thoroughly as possible:

In the Crime Scene Kitchen, Carolyn and Caroline, a mother and daughter duet, were a lot of fun to watch, and the audience was delighted to learn they were related. They worked well together when they appeared on the program and had a fantastic rapport. They were able to lead the way because of their prior experience cooking together and because they had a keen sense of smell in the kitchen where the “crime” occurred. Unfortunately, they were booted from the competition early on, but they made a significant impression.

Carolyn Tunon, the mother, works as a baker at Baked305 in the Miami-Fort Lauderdale area. Caroline Schmidt works as an administrator at Dynamic Wellness in Fort Lauderdale, Florida.

Again, it was the mother-daughter duo that competed in the crime scene kitchen. Rebecca Miller and her mother, Jeanne Plumley, own Peggy Jean’s Pies in Columbia. After several virtual calls, psychological testing, and a baking quiz, they were invited to join as the Crime Scene Kitchen contestants. They were up against professional pastry chefs trying to recreate desserts using clues found in the kitchen. Despite the pandemic disrupting the local food industry, Miller said their business had remained busy. While Miller says they were hesitant about leaving their business for an unspecified number of weeks, they could not pass up this once-in-a-lifetime opportunity.

This is the fantastic duo of Mother and son. From the very start, they never focused on the considerable amount of $100,000—all they wanted to enjoy together and give their best. Cathy Jacobson is a retired coordinator for the Dakota Nursing Program at Lake Region State College in Devils Lake, and his son is the pastry chef who lives in Vermont. They were the finalist of the crime scene kitchen.

The two spent five weeks in Glendale, Calif., while they were part of the cast. However, they didn’t win the prize, but their time together is priceless, according to them.

Toward the conclusion of the crime scene kitchen, this team of Palmerton residents were proclaimed the champions and took home $100,000.

A birthday cake was baked for judge Yolanda Gampp in the final showstopper round. Instead of duplicating an existing dessert, the teams were free to create their own creations using the provided components, as long as they followed the recipe exactly. Luis and Natalie captured the judges’ hearts with a pink fondant-wrapped multi-tiered cake.

When her team’s victory was revealed, Natalie claims she was utterly astonished.

Check out the full list of crime scene kitchen contestants:

The show’s first season culminated on July 21 with a victory celebration that crowned the show’s first winner. Since the finale was broadcast, FOX fans have been waiting anxiously to find out whether the show has been renewed or canceled.

Is There Going to be a Season 2 of Crime Scene Kitchen?

Possibly. It is not clear if FOX will bring back the baking competition series for a second season, which leaves the show’s fate in limbo.

Given how well the show paired with MasterChef: Legends throughout the summer, it is logical to assume FOX would be eager to try to recreate that magic next summer.

Deadline reports that FOX is very much considering renewing the series, but the decision has not yet been made.

Scanpan Reviews 2021: Is It Worth Buying?

How To Make Lefse: An Ideal Flatbread For Christmas!

How Do You Make Totinos Pizza Rolls Air Fryer?